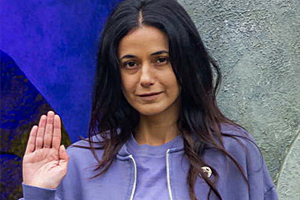 Actress and long-time Raise Hope for Congo supporter Emmanuelle Chriqui opened up during an interview with Enough Project Co-founder John Prendergast about what moved her to take action on Congo human rights issues.

JOHN: What spoke to you about these human rights issues and inspired you to get involved?

EMMANUELLE: I heard you and your friend from Darfur, Omer Ismail, and your level of commitment and passion, and it literally moved me to tears. I think thatâs what I was searching for. My personal wake-up call. And to be in a space that was intimate enough to really feel and understand what everybody was saying and to be affected by it. That was really the trigger point for me. What was most inspiring of all was the acknowledgment that there was a lot to learn. It wasnât like from one day to the next, I suddenly would become this massive activist. I needed to learn about the issues. I knew that I was moved, but I needed to understand what was going on. I needed to learn how to speak about whatâs going on. I canât bite off more than I can chew. That was a tough one because initially when you get involved in activism, you feel as though you want to do more, that youâre not doing enough. I started to brainstorm and thought, âMy creative side can really help in all of this.â So it continues to be this ongoing learning process that ebbs and flows. Iâm at the point where I see the impact that weâve already made, just in regard to Congo because thatâs the issue I really stepped up behind. Stopping the violence against women and girls was something that really resonated with me. How fortunate am I to be a woman with so many freedoms?

JOHN: Where does your desire to become involved like this come from?

EMMANUELLE: I come from a great family where spirituality and awareness are really important. When I watched the film The Greatest Silence, I remember being amazed by the strength and courage of these women. And I remember that it was initially a massive driving force for me. Like a wake-up call. That feeling that even on a really bad day, I am one of the luckiest people on the planet. To watch the stories of the Congolese women, seeing how spiritual they are, their sense of community, and the support system that they create among themselves in their villages is mind- boggling to me. Thatâs the story that needs to be told. In the film, a woman told a story about the worst atrocities Iâve ever heard that can be done to a woman. She was one of the women who started the group of women speaking at that church, almost like a therapy session. Each and every woman spoke about forgiveness and the presence of God in her life. Forgiveness? Presence of God? These women had the worst things happen to them. It was just the biggest strength of character I have ever ever heard of. It makes everything else seem so trivial. We learn from these women.

JOHN: In terms of the Internet tools, what has the most potential for spreading the word?

EMMANUELLE: Getting people to sign and pass on the online pledges or letters or petitions is important. This is going to go to the president so letâs gather as many names as we can. I know that when we did that a few months back, we got thousands and thousands of names. It was so easy: âTake this and put it on your e- mail list. Write a letter to your representative from your heart.â Thatâs what I did. I wrote a letter from my heart basically saying I rarely do this. I am moved to do this. If you would take two minutes to follow these directions, you will be making such a huge step helping humanity. Itâs so easy. Itâs already organized for us. We just need to take the few minutes out of our days to start.